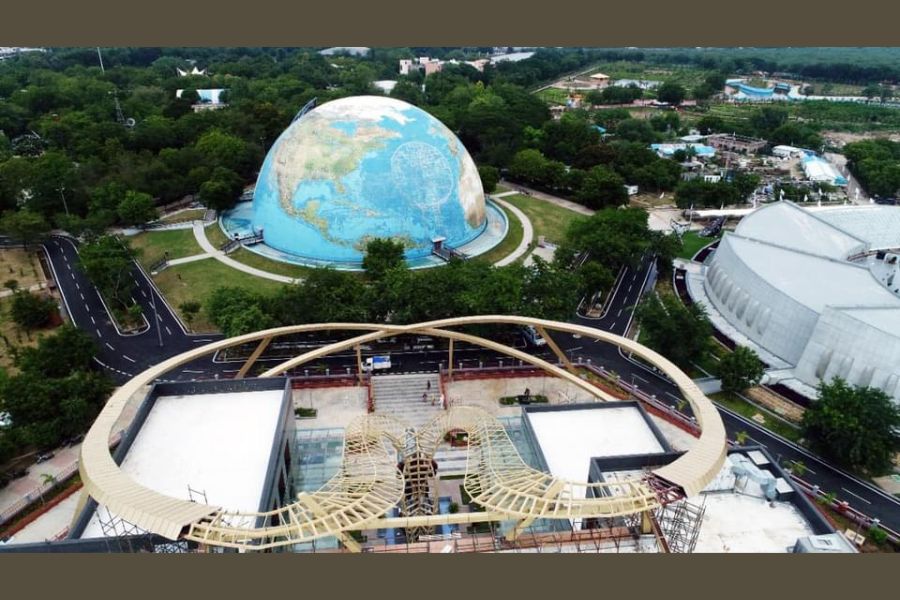 -Gujarat Science City has been named among World’s greatest 50 places for 2022 by TIMES Magazine.

August 10: With the aim of our Honorable Prime Minister Shri Narendra Modiji, working under the aegis of the Dept. of Science and Technology, Govt. of Gujarat, Science city is committed to connecting common citizens with science and to developing Scientific temperament in young minds with the aid of entertainment and experiential knowledge. Spreading over a lush green area of more than 107 hectares, the mission is to create imaginative exhibits, virtual reality activity corners, and live demonstrations in an easily understandable manner

It’s a perfect blend of education and entertainment. It showcases contemporary and imaginative exhibits, minds-on experiences, working models, virtual reality, activity corners, labs, and live demonstrations to provide the common man with an understanding of science and technology.

With the addition of three new attractions -Robotics gallery, Aquatic gallery and Nature park, Science city has set many new records this year. It has become a paradise for visitors.

These world-class galleries attract visitors of all ages and make them an important science tourism destination in the state and nation.

The Aquatic Gallery has a state-of-the-art gallery over an area of 15,000 sq m, with an opportunity to discover marine ecosystem and aquatic fauna through a 28-meter-long tunnel and large oceanarium with creative and immersive experiences. It is one of the top aquariums not only in the country but also in Asia.

The gallery has 72 exhibit tanks, ranging from small to very large, with a wide range of aquatic creatures across the globe. Students and visitors can explore 181 aquatic species, including Indian, Asian, African, American, and other aquatic systems of the world. The gallery will also have touch pools for an engaging learning experience for the kids and elders.

The Robotic Gallery is a perfect platform for exploring the future of man-machine interaction with all types of robots. A huge sculpture of a transformer has been placed at the entrance, and a pretty humanoid robot at reception is there to receive the visitors.

Visitors can see the Robo history gallery and galleries displaying Robots built for specific use cases. The sport-o-mania section has robots playing games, while Natya Mandaphas is a set of robotic orchestras and dances. The Botulity section demonstrates robotic applications for difficult terrains; in space, surgeries, wall climbing operations, defence use, and so on.

A large nature park, spreading over 25.00 acres of land, is a new attraction in Science City 2.0. The Nature Park has been designed with an excellent nature trail consisting of water bodies, fountains, a children’s play area, outdoor exhibitions, and many more.

Since Gujrat Science City 2.0 was inaugurated by the Hon’ble Prime Minister on 16th July 2021, it has been visited by innumerable enthusiasts and common visitors as a clean, green, and safe science learning and experience place.

The exhibits in different science galleries cater to all age ranges and have successfully popularised scientific exploration among the general public.

To connect the community with science, Science City organizes a series of outreach programs, hands-on activities, scientist-interactive sessions, and sky observation programs regularly to make science closer to all with interest and excitement.

Robotics Gallery: An interactive gallery demonstrating the development in the robotics domain. A socially skilled humanoid robot welcomes guests and introduces them to the facility. Aquatic Gallery: It takes visitors on a memorable voyage to the aqua world that features India’s largest public aquarium with a state-of-the-art life support system. The aquarium is home to many species, including sharks, in three different tanks and 27 meters underwater walkway tunnel

Nature Park: Spread over an area of more than 20 acres, the Nature Park is a crown to the adventures of Science City. It houses a Mist Bamboo Tunnel, an Oxygen Park, a Butterfly Garden, a Colour Garden, a Chess, and play areas for children.

Hall Of Science: The Hall of Science is a largely open research facility where guests can participate in practical learning displays and study science via exploration. It encourages visitors to interact with the displays by touching and operating them and learning about the intriguing science underpinning them.

Life Science: Its goal is to bring scientific knowledge and ecology to the experience of children and to inspire them to learn about nature, man, and their progression, as well as the

Planet Earth: Its goal is to raise public awareness, instruct, and teach people about natural calamities such as earthquakes, volcanic eruptions, and landslides, as well as to promote our planet’s stunning splendour and bountiful realities.

IMAX 3D: The IMAX experience is the most impactful and immersive film experience globally. IMAX technology transports you to never-before-seen worlds with spectacular pictures up to eight stories high and surround-sound 12,000-watt digital audio. Science Programs: The programs and events held at Science City nudges young minds with scientific questions and open the window to the discoveries and facts that run the world.