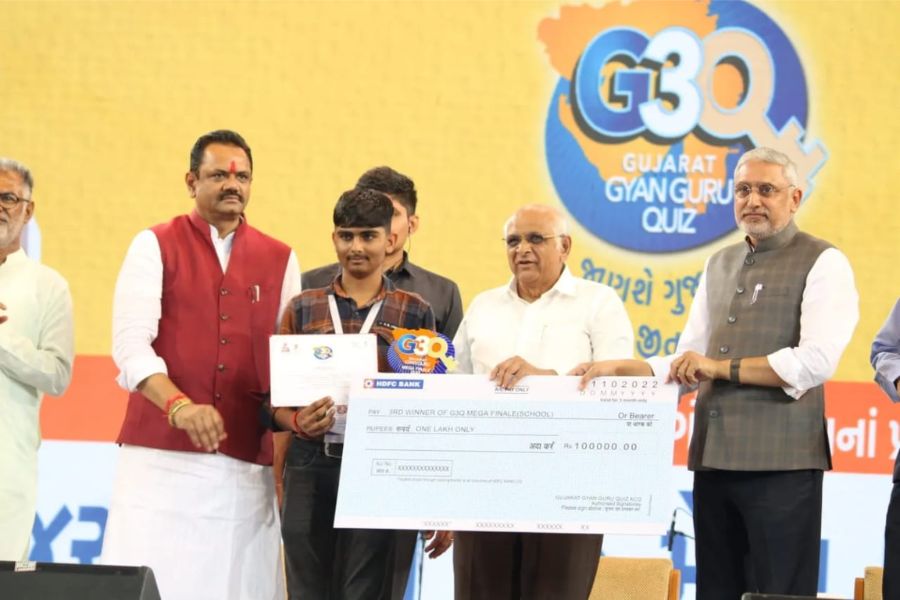 Under the guidance of Shri Bhupendra Patel, this quiz has turned out to be the largest quiz in the world which is  a matter of pride for the Education Department

Gandhinagar, October 31: Gujarat Chief Minister Shri Bhupendra Patel on the occasion of ‘Gujarat Gyan Guru Quiz’ G3Q Mega Finale Quiz held at TransStadia Ahmedabad said that the Gyan Guru Quiz has achieved the task of creating awareness among people about the schemes and their implementation by the state government and also how the government works tirelessly for the people of Gujarat. The Chief Minister also thanked the Education Department for organizing the entire quiz successfully.

Chief Minister Shri Bhupendra Patel further said that, Gujarat Gyan Guru Quiz is an excellent example on how Prime Minister tried to keep everyone connected with the government.  Shri Narendra Modi has made sincere efforts to ensure that the marginalized people also get the benefit of government schemes.

Today, under the leadership and guidance of Shri Narendra Modi beneficiaries are benefitting from the various schemes of the state government.

On this occasion, Education Minister Shri Jitubhai Vaghani said that when this quiz was started, no one had the belief that this quiz would gain lot of success.  But this quiz made it to the World Book of Records London!

He further added that, more than 27 lakh registered for this Gujarat Gyan Guru Quiz and more than 25 lakh people participated  in this quiz. Not only this, more than 1 lakh 25 thousand people were awarded prizes worth more than Rs. 25 crore for winning this quiz.

The Education Minister further added that the state government has done prolific work of providing a platform to the youth through Gujarat Gyan Guru Quiz under the guidance of the Chief Minister.

Education Minister Shri Jitubhai Vaghani said that this Gujarat Gyan Guru Quiz has seen a wonderful combination of knowledge and technology both.  He further added that the maximum number of people from the taluka wards also participated in this quiz. It is worth mentioning here that till now the more than 27.72 lakh citizens of Gujarat participated in G3Q which itself is a unique achievement in the history of education of the country.  As a part of this campaign to connect the youth and students of the state, the Gujarat Gyan Guru Quiz – G3Q, which is the treasure of knowledge was organized since the month of July, in which today under the guidance of Prime Minister Shri Narendra Modi and under the leadership of Chief Minister Shri Bhupendra Patel, the double engine government of Gujarat is determined to make the 21st century – the century of India. Under this campaign, a unique effort has been made to give unravel the power of youth of Gujarat. In the presence of Shri Dindor and Shri Kirtisingh Vaghela, Gujarat State Education Department organized Gujarat Gyan Guru Quiz – G3Q Grand Mega Finale Offline Quiz.   In the first phase it was organized at Taluka-Municipality/Ward level, Second phase was at District-Municipality level and State level in the third and final phase.

The post ‘Gujarat Gyan Guru Quiz’ makes it to the World Book of Records London appeared first on City Lights.