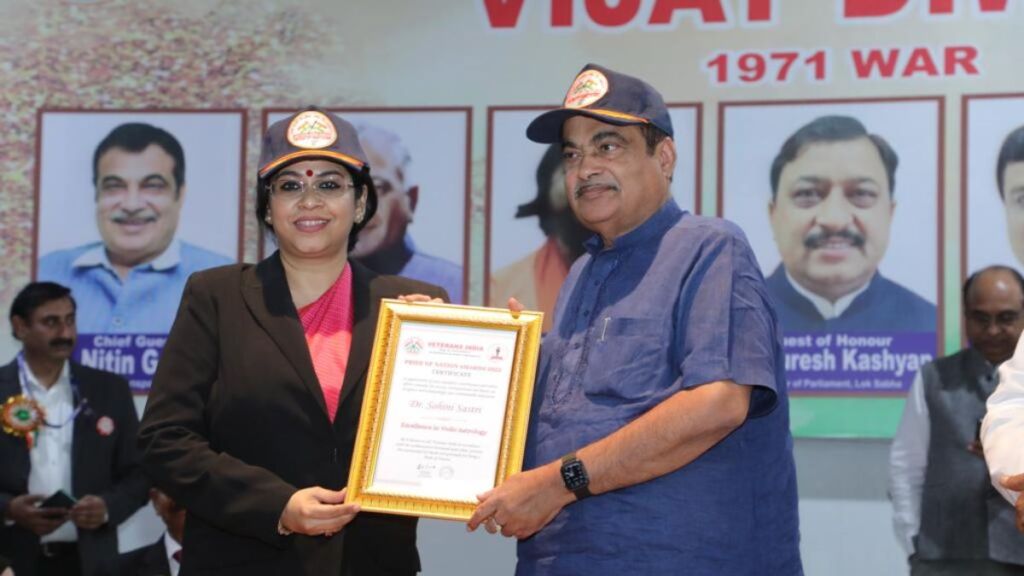 New Delhi, December 19: Counted among the topmost astrologers in the country, Dr Sohini Sastri was recently conferred with the ‘Pride of Nation Award 2022’ for showcasing excellence in Vedic astrology. Dr Sastri received the Award from Mr. Nitin Gadkari, Minister of Road Transport and Highways of India, on the occasion of Vijay Diwas 1971 and to pay tribute to Shahid Jawan of the Indian Armed Force. The event was held at the NCC Auditorium, Parade Ground, Delhi Cantonment, New Delhi, on 16th December 2022.

Organised by Veterans India on the celebrated occasion of Vijay Diwas, the day commemorates India’s historic military victory against Pakistan in the 1971 war. On this very day, the Indian army also liberated Bangladesh from Pakistan.

“Pride of Nation Awards” is an initiative by Veterans India. The award ceremony is instituted to appreciate to acknowledge not just persons in uniform but also individuals from across all walks of life who have made India proud on the global platform with their exceptional service and in their own committed way.

Dr. Sohini Sastri was one of the seven privileged personalities across India to receive this prestigious award in the presence of many dignitaries.

Also referred to as the pride of Bengal, Kolkata- based Dr. Sohini Sastri is renowned for her precise predictions, holistic alternative healing procedures, and operative remedy options. Having decades years of experience in Vedic astrology, palmistry, Vaastu, etc. Dr Sohini Sastri has vast knowledge about the movement of celestial objects and their effect. Dr Sohini is a KP (Krishnamurti Paddhati) astrologer. Other than the above Dr Sohini also professes the Colour and Rudraksha Therapy to heal people suffering from ailment and misery.

The Occult science expert is often complimented and accredited for her contribution to astrology and society. The top astrologer has been earlier bestowed with 3 National Awards in astrology by the President & Vice President of India, Governors of three states. Additionally, she is an honorary recipient of the ‘Doctor of Literature’ in Astrology at National American University, USA. The celebrated astrologer has also been bestowed with the “Best astrologer in the World” by the Astrological Association of Great Britain.

Her work has been globally recognized by numerous media houses worldwide. Her written columns are very popular among readers. She has a huge appeal among Tv viewers of all strata. She has also penned many books on astrology in non-specialists’ language (language and writing style are direct and easy to understand). Each of them has also gained immense popularity in every heart that attempts to understand their fate.

Dr Sohini Sastri is also a life coach and philanthropist. From an early age, she was drawn toward spirituality. Her indulgence with social and charitable organisations like Smile, ISKCON, and Sampark makes her more eminent. Again, her honest, polite, and candid nature and zeal to help her clients and followers through her vast divine knowledge and power make her personality monumental. She has saved many lives and families undergoing financial, physical, and mental trauma with her miraculous solutions.www.sohinisastri.com